Chicken 65 is one dish which always has a special place at the table, the moment it shows up at the table it takes the privilege to disappear in no time. From upscale bars to highway dhabas, Chicken 65 has travelled far and wide as a bar snack, or an indulgent meal accompaniment. As per order analysis by Swiggy, the food delivery app, in 2017, after chicken biryani, Chicken 65 is the most ordered chicken item nationally [1]. This shows the immense popularity of this entrée or starter dish.

Due to the complex flavour emanating from the combination of multiple exotic spices, south India has contributed many mouth watering dishes to the rich Indian culinary landscape. There are so many of these delectable dishes which were invented or modernised in last century. Chicken 65 is one of such dishes which was invented in mid 20th century. Originating from south of India the dish has spread widely all over the country.

The preparation of this iconic dish varies from place to place. In Chennai the dish is prepared in a single stage; large pieces of chicken with bones marinated in a combination of curd (yoghurt) and spices and deep fried. Whereas, in the Hyderabadi version small boneless pieces of chicken is used. Its soaked in similar marinade and deep fried. But there is a second stage to finish the dish; cooking the fried chicken pieces with tempering of curd (yoghurt), green chillies, curry leaves and garlic. The Karnataka version of Chicken 65 is garnished with freshly grated coconut.

There is a constant controversy on “where did this dish originate” and “why the name”. Both Chennai and Hyderabad claim it as their creation. To avoid the controversy (similar to the one on Rasogolla between Bengal and Odisha), I decided to put up the recipe for “Hyderabadi Chicken 65“, which is my personal favourite among all versions.

On “why the name”, there are absurd anecdotal theories, but worth a reading:

Setting aside all these absurd theories, this is the sort of dish that can set your mouth on fire, make your heart beat faster and kick the usual bread-coated fried chicken to the curb. It’s deep-fried (of course), with this crazy saltiness and crunchiness to it, and punchy flavours of curry leaves, ginger, garlic, chillies and all the ingredients that make a happy Indian dish. Chicken 65 is a classic, and a classic deserves special mention. 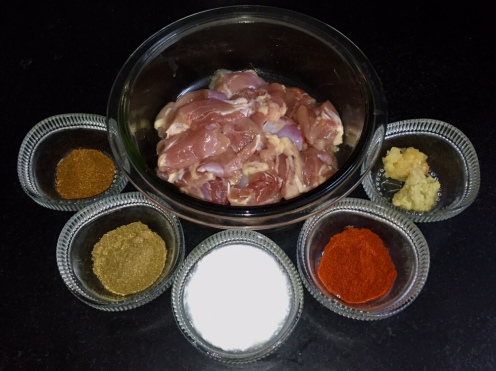 I prefer to use chicken thigh meat for this dish as it stays more succulent even after two stages of cooking. You may use chicken breast if you like it more.

This recipe is for about 350 gms boneless chicken.

Cut the meat into medium sized pieces. Keeping your knife slanted while cutting chicken pieces prevents them from drying up when deep fried.

For the marinade you need one tablespoon each of ginger and garlic paste, two table spoon Kashmiri red chilli powder, one fourth cup hung curd, one table spoon each of coriander powder and garam masala (Indian all spices) powder.

Add all the above ingredients to the chicken pieces, squeeze juice of half a lemon, add salt to taste and mix well. 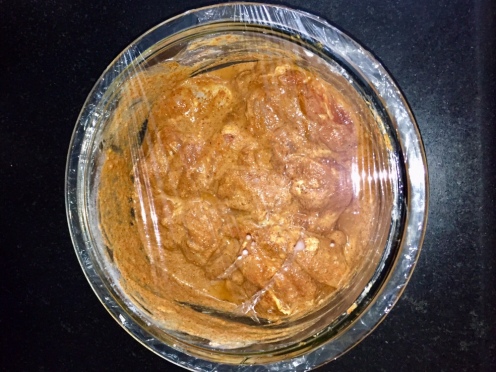 Cover the dish and refrigerate for at least 3 to 4 hours.

The other items you need are one egg, two teaspoonful diced garlic, one tablespoon each of rice flour and cornflour, 8 to 10 green chillies cut in halves, a good bunch of curry leaves and quarter cup of curd.

I slice the chillies in halves, remove the seeds and wash them to cut down the heat. Leave the seeds on if you like more heat in the dish. 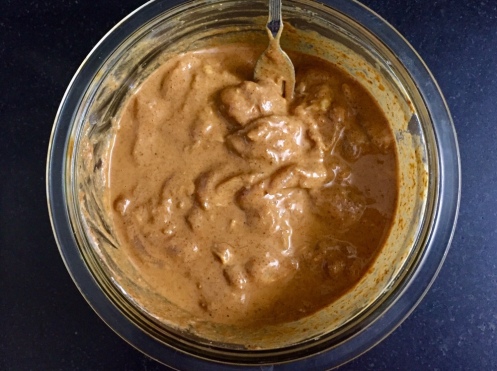 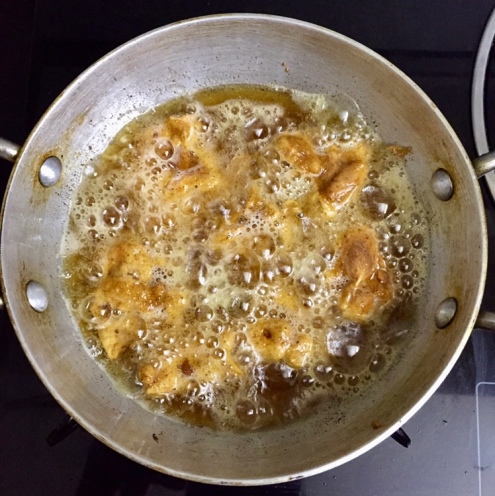 Deep fry the chicken pieces until they are golden brown, crunchy on the exterior and soft and succulent inside. Remove and drain excess oil by placing on paper towel.

Preserve the residual marinade in the bowl to be used later. 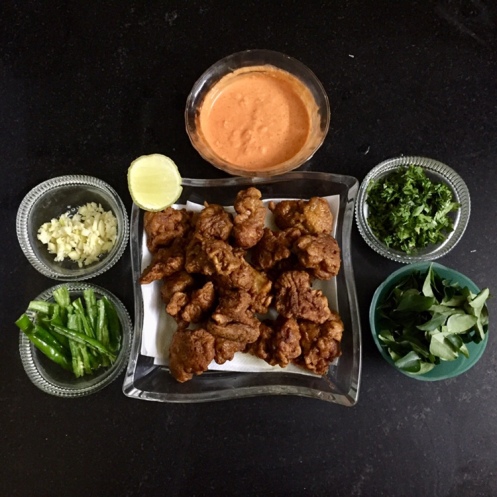 Add the leftover marinade and half a lime to the curd and mix well.

In a flat pan heat oil. Fry diced garlic and chillies until the garlic loses its rawness and then add curry leaves. Fry for couple more minutes.

Put the marinade mixed curd in the pan. Add three to four table spoon of water and salt to taste, mix well and cook for 5 minutes.

Most restaurants add red food colour and Ajinomoto (monosodium glutamate) at this stage to enhance the look and taste. You may, if you do not feel strongly against using artificial colour and flavour enhancer. I like my dishes with natural colour and flavour. Good Kashmiri red chilli powder, if used in right quantity, gives vibrant red colour naturally.

Switch off the flame, add coriander leaves and mix well. Your Hyderabadi Chicken 65 is ready. 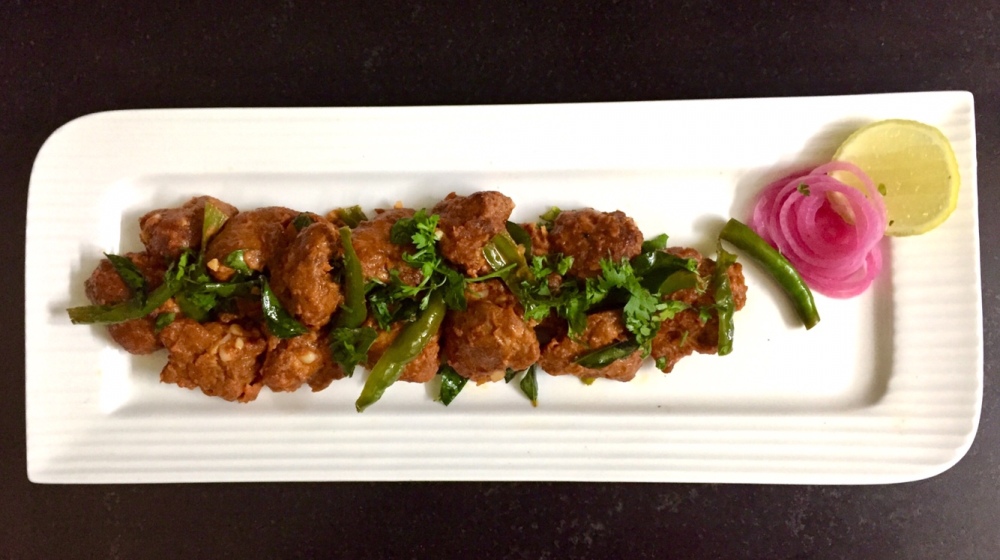 Serve your Hyderabadi Chicken 65 garnished with coriander leaves. Accompanied in this picture with onion and chilli pickled in vinegar and a slice of lime.